This article is the joint work of Neil Johnson and myself.

The popular SSM2164 quad VCA from Analog Devices, and its clone the V2164 from cool audio (we'll stick to the original name), exhibits a rather bad failure mode:

1-The SSM2164 exhibits a catastrophic failure mode when the V+ pin is powered and the V- pin disconnected . The symptom is massive current flow into V+ pin resulting in internal heating, which, if not limited, results in destruction of the die.
2-In a modular synthesizer there is the possibility of accidentally disconnecting the negative rail. For example, the power supply could trip its negative output and disconnecting while moving cases. If this should ever occur then all the SSM2164 devices that are in the modular synthesizer will be destroyed.

It is therefore especially important to protect the SSM2164 in these types of open systems (i.e., where users can add and remove modules themselves): In closed systems, where a supply connection can be tampered with, this situation is very much less likely, but we feel that the information presented on this page may still be relevant.

By far the best solution we have devised consists of adding a single Schottky diode with its anode connected to the V-pin (pin9) and its cathode to Ground (pin8).

It appears that if the V- rail is disconnected the diode provides a safe path for current to safely flow out of pin 9 (V-) to ground without causing any damage to the SSM2164. The suspicion is that there is some sort of parasitic crow-bar that is triggered when the V- pin rises one diode drop (about 0.6 V) above ground. The Schottky stops this happening by hard-limiting the V-pin to about half of that (about 0.3V) 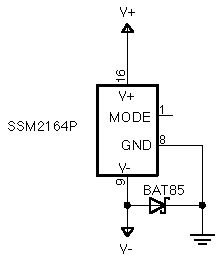 To prove this solution the following experiment was conducted:
1-A 100Ω resistor was placed in series in the positive supply to pin 16 to limit the fault current to about 94mA
2-Current flow into pin 16 under test conditions(worst case signal and control voltages) was measured at 10mA (typical about 5mA)
3-When the negative supply was disconnected, the pin 16 current immediately rose to 94mA indicating fault condition.
4-Adding a BAT85 Schottky connected with its anode to pin 9 and its cathode to pin 8 the current into pin 16 dropped to 0mA

Note: if the V- rail drops to 0V as opposed to disconnected, so that current can still flow into the V- rail, the SSM2164 behaves the same safe way. It is only in the situation where the V- rail is completely disconnected that this fault occurs.

Remember that the Schottky diode is connected between the negative supply and the ground. So, in the case that, accidentally, a synthesizer's module was reverse connected*, the Schottky diode could be destructed.
The very same thing occurs to the SSM2164.
Therefore, it is recommended to use some reversal polarity protection when using the "Power Rail Failure Protection" described in this article and the SMM2164.

The following solutions were also evaluated in this study. They all provide some level of protection, but none are as satisfactory as the preferred solution described above.